The article, "This Is the Tiniest Little Quadruped Robot We've Ever Seen," was featured in their robotics blog and highlighted work the two had presented "on the gait characteristics of magnetically actuated legged robots weighing less than 2 grams" at IEEE's International Conference on Robotics and Automation (ICRA) held last month in Stockholm, Sweden.

The tiny robots, which currently measure at 20mm in length and have the potential to get much smaller, are 3-D printed, and then have magnetically actuated motors added to them. According to the article, "the robot is magnetically actuated, using an externally generated magnetic field. Each of the robot’s four hips has a 2-mm neodymium cube magnet embedded into it, and when you rotate a big magnet in close proximity to the robot, the magnetic field causes those little magnets to rotate as well, spinning the robot’s legs. By changing the dipole orientation of the leg magnets in different combinations, you can cause the robot to move with different gaits, including trotting, waddling, bounding and pronking."

Interestingly, the researchers discovered that the pronking motion—a motion where all four limbs lift off the ground simultaneously—was the best gait for moving over flat and mildly uneven terrain. On flat ground, the little robots were able to cover approximately four times their body length per second at this gait. However, as the going got tougher, other gaits outperformed pronking.

Bergbreiter is Director of the Maryland Robotics Center, and holds a joint appointment with both the University of Maryland's Department of Mechanical Engineering and the Institute for Systems Research.

St. Pierre is a third year Ph.D. student in Bergbreiter’s Maryland Microrobotics Laboratory and focuses on locomotion at sub-gram scales and understanding the forces and dynamics involved in building more efficient and effective small-scale robots. 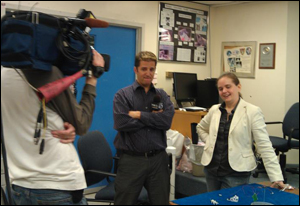