The team received their award at the Young Scientist Symposium of the World Hydrogen Energy Conference 2012, where they presented their proposed plant design, “Recommended Design for the University of Maryland Combined Heat, Hydrogen, and Power System." They have also submitted a paper to the International Journal of Hydrogen Energy.

Students were challenged to plan and design a tri-generation system that produces electricity, heat, and hydrogen for their university campus. A panel of 16 judges from industry, government and national laboratories awarded the Clark School team 91 percent of the available points. Their design would reduce the equivalent of taking 2,300 cars off the road, and utilizes organic and municipal solid waste via gasification and anaerobic digestion technology.

Prof. David Akin (aerospace engineering) and his ENAE468 class designed and built a planetary rover and demonstrated its ability to perform a series of competitive tasks at the NASA Johnson Space Center Rock Yard in Houston, Texas. The competition involves bringing part of the team on-site to Houston while another part of the team stays behind to serve as "mission control" for the vehicle. In addition to operating the vehicle, the team delivered a final report and participated in a poster session and educational/pulbic outreach activities.

Fans of the Clark School's vehicle, Rhea II, could follow along during the competition by reading the team's blog. 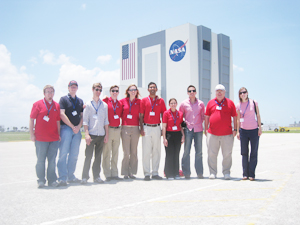