A research group headed by UMIACS Director and ISR-affiliated Professor V.S. Subrahmanian has created a software platform that can rapidly recreate a given part of the world. The Cultural Adversarial Game Engine (CAGE) provides a virtual world with an accurate look and feel, as well as people who behave in accordance with models of the behaviors of the socio-cultural-ethnic-religious groups to which they belong, and whose behaviors can be predicted. Military planners and defense policy analysts face complex situations, not only in that conflicts may involve several opposing groups within a region, but also in that military actions are only part of an array of options available in trying to foster stable, peaceful conditions. CAGE can be used for virtually exploring “what if” scenarios in complex military environments. Games based on the CAGE platform help defense analysts understand the repercussions of proposed recommendations for policy options or military actions. They can propose a policy option and walk skeptical commanders through a virtual world where the commander can literally "see" how things might play out. This process gives the commander a view of the most likely strengths and weaknesses of any particular course of action. CAGE provides direct support for game-theoretic reasoning and includes real-world models of terrorist groups or sociocultural groups that forces may encounter. The software was developed in the Laboratory for Computational Cultural Dynamics (LCCD). Subrahmanian is the PI for a team that includes John Dickerson, Aaron Mannes and Vanina Martinez of the University of Maryland as well as Diego Reforgiato from the Università di Catania, Italy. Funding for the project came from the Air Force Office of Scientific Research, the Army Research Office, and the National Science Foundation. Related predictive technologies in other engines (e.g. SOMA and CONVEX) developed by Subrahmanian’s team are theoretically proven to work on any data source. The team currently is exploring using these engine for unrelated realms like disease tracking. CAGE was recently profiled in Science (story by Subrahmanian and Dickerson, with a descriptive video), Scientific American and Medical News Today.

Davis, Yu, Subrahmanian finalists at Invention of the Year... 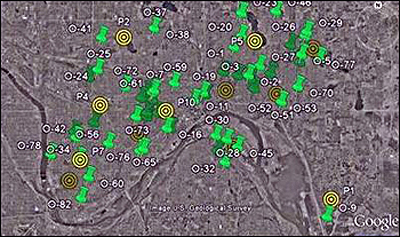