Established by the John and Maureen Hendricks Charitable Foundation in 2008 to support the efforts of the University of Maryland Energy Research Center (UMERC), the John and Maureen Hendricks Energy Research Fellowship program supports students engaged in research that advances the frontiers of energy science and technology, particularly forward-looking approaches to alternative energy generation and storage.

Schroeder received the award for his proposal to design and construct a novel three-dimensional, high-aspect ratio, all-solid-state, lithium-O2 battery. The battery is a proposed successor to today's popular lithium-ion batteries, which Schroeder believes are approaching the material limits of further improvements.

Lithium-O2 batteries, also known as lithium-air batteries, consist of a lithium anode, a lithium ion-conducting electrolyte, and a porous cathode that uses oxygen from the surrounding environment as its oxidant rather than storing ions within the battery's electrodes. Lithium-O2 batteries have a potential energy density of up to ten times that their lithium-ion cousins. Schroeder will explore the use of a new material and nanostructure for the cathode, the most complex component of a lithium-O2 battery, that exhibits good oxygen capture, decomposition, and diffusion, with high conductivity, and stability through cycles of charging and discharging. He will also design and characterize the battery's other components, integrate them with the new cathode using atomic layer deposition, optimize their interfaces, and finally fabricate and test a prototype.

Schroeder will conduct the research under the auspices of the Nanostructures for Electrical Energy Storage (NEES) group, the university's Department of Energy-sponsored Energy Frontier Research Center (EFRC) directed by Rubloff.

Watch an interview with Marshall Schroeder, in which he explains his research and goals. Video courtesy of UMERC.

Schroeder began working for Rubloff as an undergraduate majoring in materials science and engineering. As he neared the completion of his degree, he came to the conclusion there was more he wanted to accomplish.

"I realized that I had access to a tremendous number of facilities and instruments here at UMD, and was very interested in pursuing the work I had started," he says. After being accepted into MSE's graduate program and earning his B.S. with university honors in 2010, he remained with the Rubloff Group. He performs his current research on the system he helped to assemble as an undergraduate.

Outside of the lab, Schroeder enjoys soccer and flag football, and is one of the captains of the university's Ultimate Frisbee team. He describes himself as an avid fisherman and guitarist.

Schroeder is the second member of the Rubloff Group in recent years to be named a John and Maureen Hendricks Energy Research Fellow; he was preceded by Parag Banerjee in 2008. 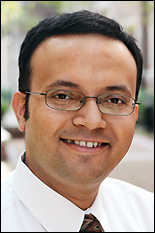