Second year students in Electrical and Computer Engineering Andres Toro, Zachary Lawrence and Joshua Drubin took home all the marbles at the Fall 2013 MHacks, competition, Sept. 20-22 at the University of Michigan.

The team won first prize for building an intelligent trash can that sorts recyclables from garbage, at the world's largest college hackathon. MHacks drew 1,214 participants from 100 schools around the country for 36 hours of building innovative projects from scratch.

Toro, Lawrence and Drubin built a single-stream receptacle bin with a swing top that pivots in a different direction based on measuring the frequency of the sound an object makes when it hits the receptacle. Cans and bottles that create a "ping" end up on one side of a partition, and items like plastic foam cups that generate a "thud" go on the other.

The Maryland team was one of only a few to build a physical object rather than an app or web tool. "I never dreamed of coming here and actually winning," Drubin said. "It feels unbelievable" — even on six hours sleep total for the past two nights.

At Maryland, Drubin most recently has been part of the CPS and Cooperative Autonomy lab team working on the National Science Foundation/National Geographic Society grant, "Remote Imaging of Community Ecology via Animal-borne Wireless Networks", which will help monitor and protect endangered species. He developed algorithms and hardware under the supervision of Dr. Konrad Aschenbach, Mr. Greg Marshall and Associate Professor Nuno Martins (ECE/ISR).

Drubin said, "Participating in MHacks has made me value my education in ECE much more than pre-hackathon. We ended up applying concepts that we’ve learned in foundation classes such as digital logic and physics in a very real and hands-on way, which is extremely rewarding, and fun." 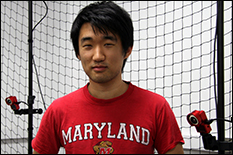