New research by Professor Cynthia Moss (Psychology/ISR) shows Egyptian fruit bats find a target by NOT aiming their guiding sonar directly at it. Instead, they alternately point the sound beam to either side of the target. The new findings by researchers from Maryland and the Weizmann Institute of Science in Israel suggest that this strategy optimizes the bats' ability to pinpoint the location of a target, but also makes it harder for them to detect a target in the first place.

"We think that this tradeoff between detecting a object and determining its location is fundamental to any process that involves tracking an object whether done by a bat, a dog or a human, and whether accomplished through hearing, smell or sight," Moss said. She is the director of the Auditory Neuroethology Lab, better known as the bat lab.

Moss, colleagues Nachum Ulanovsky and Yossi Yovel of the Weizmann Institute, and Ben Falk, a graduate student of Moss's in the Neuroscience and Cognitive Science Program, published their findings in this week's edition of the journal Science. Ulanovsky, the paper's corresponding author, was a Maryland postdoctoral student under Moss.

Ulanovsky and Yossi trained fruit bats to land on a spherical target while relying exclusively on their sonar. Trained in Israel, the bats were then brought to Maryland to be studied in Moss's specialized lab. High speed infrared cameras recorded the bats movement in flight while the shape and direction of their sonar beam patterns was measured with a sensitive arrangement of 20 microphones positioned around the large room. These bats emit paired clicking sounds and the researchers found that the sonar beam created by each click alternated to the left and right of a target. This alternating pattern effectively directed the inside edge, or maximum slope, of each sonar beam onto the target. As a result, any change in the relative position of the target to the bat reflected that large sonar edge back at the bat, delivering the largest possible change in echo intensity.

However, as the researchers note, there is a cost to this approach: less sound is reflected back to the bat from the object than if the sound beam were aimed more directly toward the object. Thus the fruit bat's strategy of using the steepest edge of a sonar beam (which intuitively follows a mathematical optimization formula) sacrifices a little target-detection for pinpoint accuracy in tracking.

Detecting vs. Tracking
By changing the conditions of their experiments in the bat lab the researchers were able to show that the fruit bats will sometimes change their echolocation strategy based on the situation. To do this, a reflecting board was positioned behind the target, creating "noise" echoes that competed with those from the target, potentially making detection of the target more difficult. In trials under these conditions, some bats altered their sound beam directional strategy. These bats started off with the wide side to side pointing that maximizes determining location, but once they got closer, switched to point the beams from both clicks almost directly at the target.

Moss, who has been researching bat echolocation for 20 years, notes that even among different bat species there are different approaches to tracking objects. Much of the research she and her students have conducted in the bat lab has looked at big brown bats, which are common in the United States. Big brown bars generate sound with their vocal cords and aim the resulting sound beam directly at their targets, an approach that maximizes their ability to detect the mosquitoes and other small, fast moving insects that serve as food.

"The difference in sonar beam directing strategies between the Egyptian Fruit bats and Big Brown bats may be related to the differences between their sound production mechanisms (tongue clicks vs. vocalizations), echo processing systems, behavioral requirements in nature, or other species differences," Moss said.

The researchers suggest other animals reflect similar approaches to the detection versus tracking tradeoff. Their paper gives the example of a hound dog following an odor trail using a similar localization approach to that used by the tongue clicking Egyptian fruit bats.

"People without sight use echolocation, in some cases also generating sound by tongue clicking," said Moss. One such person, she noted, is Daniel Kish, Executive Director of World Access for the Blind. Totally blind from birth, Kish uses tongue clicking for sonar that allows him to "see" his enviroment at a very high level, even allowing him to safely ride a bike in a city street. Kish is "the first totally blind, national certified Orientation & Mobility Specialist," according to the website for World Access for the Blind. Check out this YouTube video about Kish and his work educating others to use echolocation.

"There are no measurements of the directionality of the sound beams used by blind echolocators like Kish," Moss said. "But looking at head movements in echo locating blind individuals, it seems that some may show a similar strategy [to that of fruit bats]."

—Thanks to Lee Tune at the UM NewsDesk for this story.

Wen, Horiuchi are runners up for BioCAS 2018 Best Paper Award 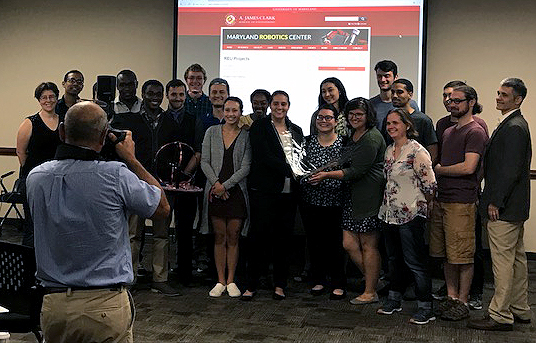