Human brains are able to comprehend and manipulate both words and numbers. While numerical operations may rely on language for precise calculations or share logical and syntactic rules with language, the neural basis of numerical processing is ultimately distinct from language processing. People use distinct, dedicated cortical networks to understand language or work through equations.

Cortical Processing of Arithmetic and Simple Sentences in an Auditory Attention Task was written by ECE Ph.D. students Joshua Kulasingham (the lead author), Neha Joshi, and Mohsen Rezaeizadeh; and Professor Jonathan Simon (ECE/ISR/Biology). It appeared in the August 2021 Journal of Neuroscience. The researchers determine that these cortical networks naturally segregate when listeners are asked to pay attention to either math or to language in a situation where both are present.

Read our story about this research.

Listen to what the study participants heard!

Here are three of the audio files the study's participants listened to while their brain activity was being recorded in the MEG scanner.

As you listen to words and sentences, your brain's neural responses are originating primarily in the left temporal area of your brain. Language is mainly processed in this part of the brain. (See the top half "A" of the figure at right.) Feel free to play the clip several times. Your comprehension of what's being said should improve upon multiple listenings.

As you listen to symbols and equations, your brain's neural responses are originating from bilateral parietal areas of your brain. This is consistent with how the brain processes arithmetic. (See the bottom half "B" of the figure at right.) Again, feel free to play the clip several times!

Mixture of words and sentences plus symbols and equations

In this mixture of both words and sentences plus symbols and equations, decide which stream you will listen to, then concentrate on only that stream. The researchers found that when they asked the study subjects to focus on either sentences or equations, they later could decode which stream was being attended to from the responses that showed up on the MEG scans, especially in the left superior parietal areas of the brain. For this example in particular, repeated listening will reap rewards in comprehension!

The researchers determined that simultaneous neural processing of the acoustics of words in the spoken sentences and the symbols of the equations occurred in the brain's auditory cortex. 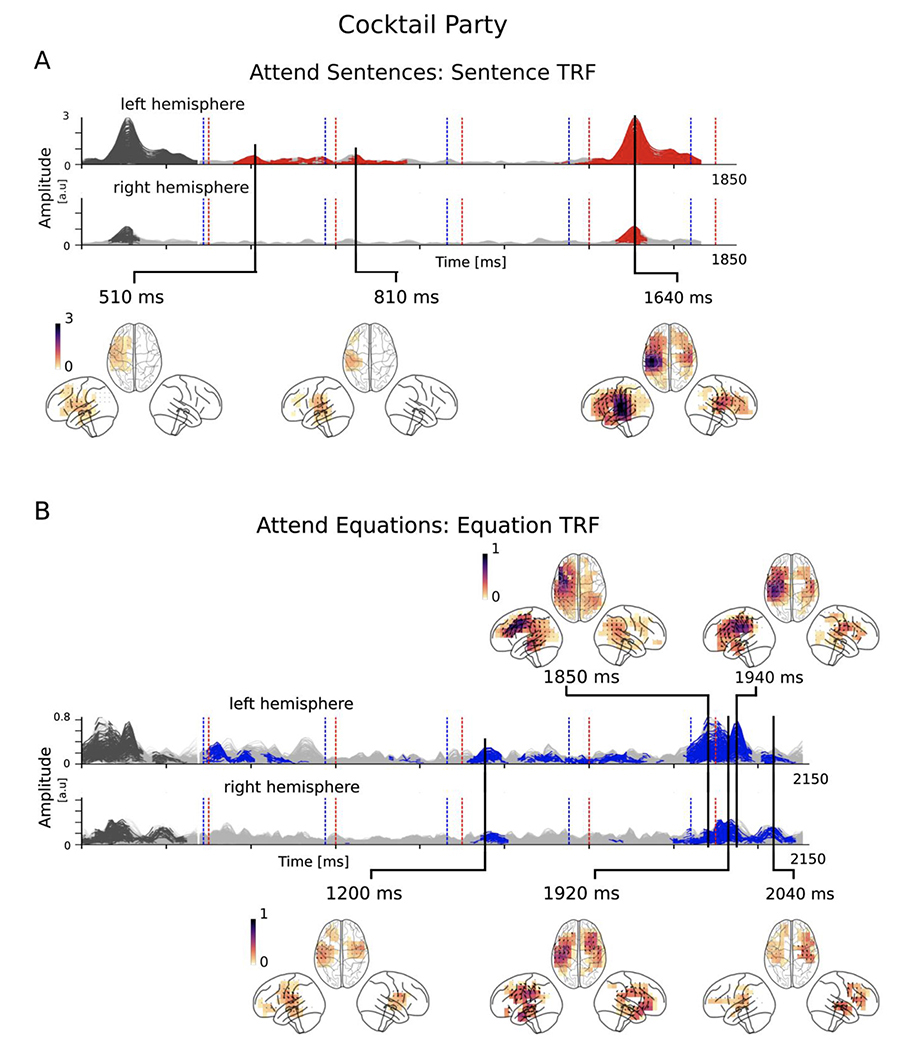 Figure 6 from the paper. The figure shows the brain responses that track the 1.5 second long sentences (top) and the 1.8 second long equations (bottom) averaged across subjects while they attended to that audio stream. Snapshots of the areas of brain activity at response peaks are also shown.