Since 2007, University of Maryland professors Reza Ghodssi (Electrical and Computer Engineering and Institute for Systems Research) and James Culver (Plant Sciences and Landscape Architecture and Institute of Bioscience and Biotechnology Research) have partnered with colleagues from materials science, chemistry and bioengineering to create devices using the Tobacco mosaic virus as a biological nanoscaffold. The work has resulted in never-before-possible microsystems for energy storage and biological sensors.

The rigid, rod-shaped Tobacco mosaic virus (TMV), which under an electron microscope appears as rigid rods, is a well-known and widespread plant virus that devastates tobacco, tomatoes, peppers, and other vegetation—in part because of its ability to quickly and precisely replicate itself. But in the lab, the "self-renewing" and "self-assembling" properties of TMV viruses can be harnessed and exploited to help build advanced micro- and nanoscale systems.

Culver, in collaboration with Mike Harris, Purdue University, and with post-doctoral researcher Elizabeth Royston originally developed specific genetic modifications that allow the virus to uniformly cover surfaces with intricate and orderly patterns that bind to metal and other materials.

Ghodssi’s expertise in miniature devices and system integration led to the very first showing of a microfabricated device with the nanoscaffolds coated with materials of various types for useful purposes, such as conducting electricity or identifying chemical and biological markers. The virus itself is rendered inert during the manufacturing process and poses no danger to researchers, users or the environment. Compared to other nanofabrication techniques, using TMV to manufacture devices is simpler, far less expensive, sustainable and easily scaled. The products created are generally lighter and more durable than their commercial counterparts.

Ghodssi, Culver, and Chemistry Professor Chunsheng Wang worked together on a long-term project to build powerful new batteries using TMV. In this work, TMV’s rod-like nanostructure is modified to directly bind and arrange perpendicularly to a battery electrode’s metallic surface. The rods then are coated with a conductive thin film that can collect electrical current, and an active material that participates in electrochemical reactions. Because of the intricate, orderly TMV scaffold, the electrode surface area is greatly increased, which raises its capacity to store energy and enable fast charge/discharge times.  The resulting batteries have up to a 10-fold increase in energy capacity over standard lithium ion batteries and longer cycle lives.

The modified TMV binds directly to metal, so no other binding or conducting agents are needed, and the resulting components are lighter, stronger and less expensive than conventional parts. This TMV nanostructure is being used to build tiny components for a new generation of small, powerful and highly efficient batteries and fuel cells.

“The resulting batteries are a leap forward in many ways and will be ideal for use not only in small electronic devices but in novel applications that have been limited so far by the size of the required battery,” said Ghodssi. “The technology that we have developed can be used to produce energy storage devices for integrated microsystems such as wireless sensors networks. These systems have to be really small in size—millimeter or sub-millimeter—so that they can be deployed in large numbers in remote environments for applications like homeland security, agriculture, environmental monitoring and more; to power these devices, equally small batteries are required, without compromising in performance.”

In related research, Ghodssi, his postdoctoral researcher Ekaterina Pomerantseva, his Ph.D. student/postdoctoral researcher Konstantinos Gerasopoulos and Professor Gary Rubloff (Materials Science and Institute for Systems Research) advanced the use of atomic layer deposition (ALD) technology to coat TMV-based nanowires, resulting in novel biotemplated electrodes for tiny lithium-ion batteries. The researchers genetically enhanced TMV’s ability to bind to metal ions and control the form into which it self-assembles. The customized TMV structure, attached to a substrate, is then coated with metal ions to form nanowires that can serve as the basis of new devices, including micro-batteries. The nanowires create a large surface area on which electrodes and electrolytes can interact, resulting in a higher energy storage capacity and more power than what is found in currently available products.

Today, Pomerantseva is on the engineering faculty at Drexel University and Gerasopoulos is a research scientist at the Johns Hopkins University Applied Physics Laboratory.

Funding for the energy storage work came from the National Science Foundation; the Maryland Technology Development Corporation (TEDCO) and the Maryland Biotechnology Center, Department of Business and Economic Development (DBED); and the Laboratory for Physical Sciences at the University of Maryland. 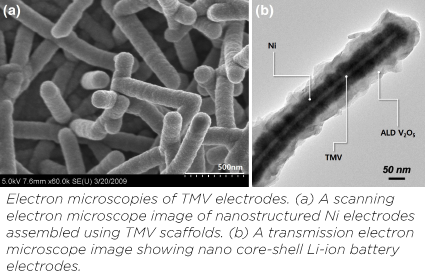 The VLPs developed by Culver, his Ph.D. student Adam Brown and research associate Lindsey Naves have TMV’s structural and chemical functions but are genetically inert, removing concerns about the virus spreading plant disease.

“VLPs solve one of the major limitations associated with the virus, that being the need for a coat protein that functions for the virus during infection,” Culver says. “With VLPs we can now make structural and protein modifications to the viral particle that are functionally specific to our nanotechnology studies but would otherwise not be tolerated by the virus.”

VLPs can be produced efficiently by bacteria in Petri dishes, compared to conventional TMV harvesting which involves growing the virus on plants then extracting it through labor-intense methods.

Recently, Ghodssi and his graduate students Xiao Zhu (Mike) Fan (EE Ph.D. 2013, now MEMS Scientist at Honeywell) and Faheng Zang (EE Ph.D. 2016, currently a postdoctoral associate at Princeton University) developed a microfluidic-based way to use these VLPs in micro transducers—devices inside sensors that convert physical variations into electrical signals. The particles are arrayed on the surface of the transducers. When specific molecules come into contact with the particles, they trigger the transducer, signaling the sensor to issue an alert to the molecules’ presence. Because of their high surface area-to-volume properties and intricate and orderly structures, the VLPs can be packed quite densely. This results in an extremely sensitive and powerful sensor that can be used in stationary or portable ways. Their integrated microsystem allows rapid loading of VLPs onto transducer surfaces to perform highly sensitive and selective immunoassays, detecting antibodies in real time without a need for typically used labeling molecules. Currently, the VLP-based microsystem is being investigated as an efficient, low-cost, and portable sensing platform for early in-field detection of pathogen molecules that are harmful to a range of agricultural industries.

The biosensor research is supported by the National Science Foundation and the biochemistry program of the Army Research Office. 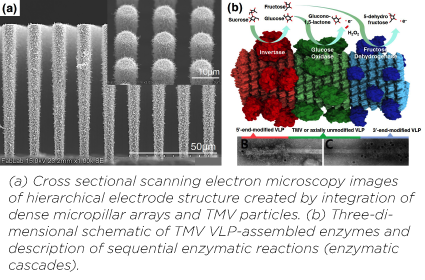 High-performance bioenergy harvesters known as enzymatic biofuel cells (EBCs) are a potential energy source for wearable or implanted medical electronic devices. Instead of employing metals like the platinum and nickel found in conventional fuel cells as catalysts, EBCs use enzymes derived from living cells. But EBCs face a major development challenge because of their low current/power densities, which are limited by charge transfer kinetics and low enzyme immobilization density.

To meet this challenge, Culver’s group is using protein and genetic engineering strategies to control the assembly of the rod-shaped VLPs.  This will provide the ability to position and orient individual enzymes at the nanoscale, similar to the compartmentalization of enzyme cascades that occurs in cells.

Ghodssi and his graduate student Sangwook Chu are investigating using these TMV VLPs as a template that could provide a much-needed higher density for the enzyme immobilization. The biofabrication technology they have recently developed involves deploying the VLP nanoparticles onto densely arranged three-dimensional electrodes, helping a further increase in the performance of the bioenergy harvesting devices. The combined efforts of both groups will lead to more efficient immobilization of enzymes and help advance enzyme-based bioelectronics.

This research is supported by the Biochemistry Program of the Army Research Office. 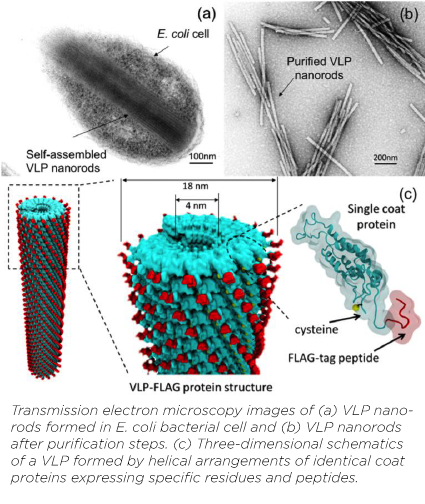 In addition, Ghodssi’s former postdoctoral researcher Matthew McCarthy has used TMV to create materials with a “superhydrophobic” surface that mimics the water-resisting properties of wetland plant leaves. The new surfaces are fabricated using biological virus nanostructures as self-assembled templates and have a hierarchical structure with both microscale and nanoscale features. Their properties could one day make them useful as coatings on buildings, solar cells, and textiles. They also could be employed in applications that require drag reduction and increased heat transfer. McCarthy, now on faculty at Drexel University, recently won an NSF CAREER Award “Investigation of Boiling Heat Transfer Mechanisms and their Enhancement using Biotemplated Nanostructures.”

Of the long-term TMV research partnership Culver notes: “It is the cross-disciplinary aspect of the collaboration that has made it so fertile.  Reza and I come from completely different fields and on our own developed the base systems for these studies. However it is the merging of our individual areas of expertise that has created the synergy that makes our work truly unique and allows us to push into to new areas.”

Four graduate students and seven postdoctoral researchers in Ghodssi’s and Culver’s research groups have contributed to TMV-related projects over the years. The work has received funding from the National Science Foundation; the U.S. Department of Energy; the Army Research Office; the Maryland Technology Development Corporation (TEDCO) and the Maryland Biotechnology Center, Department of Business and Economic Development (DBED); and the University of Maryland’s Laboratory for Physical Sciences. TMV research has resulted in 24 journal publications, one patent and one provisional patent application. It also was featured in a National Science Foundation video to inspire high school students to investigate STEM careers. 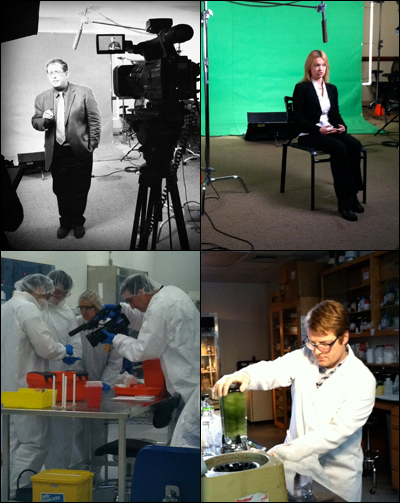 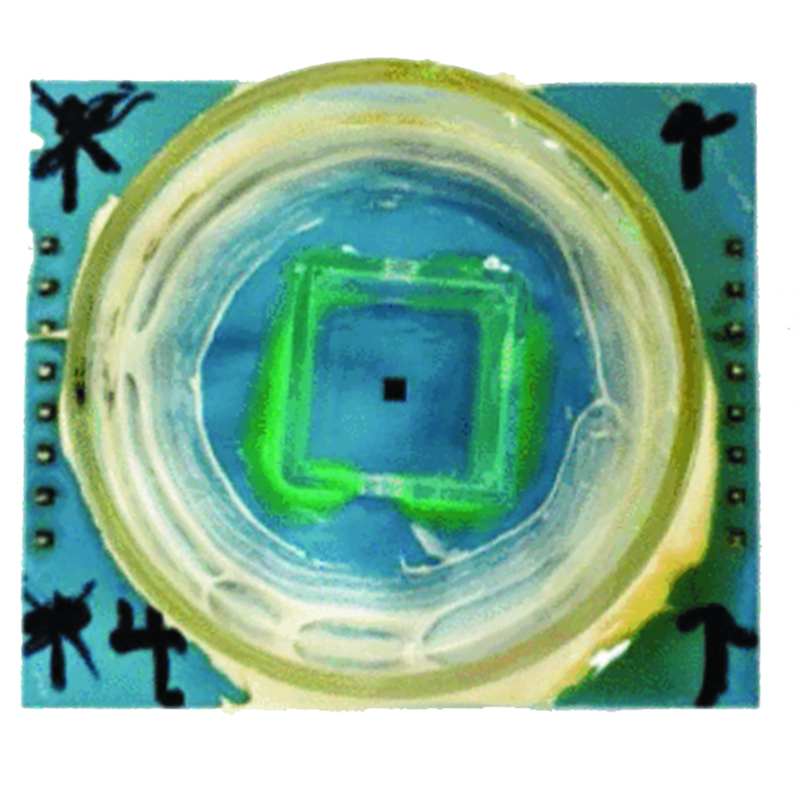