Department of Materials Science and Engineering (MSE) graduate student Konstantinos Gerasopoulos has been named the winner of the 2011 MSE Graduate Research Award for his doctoral thesis, titled "Integration and Characterization of Tobacco Mosaic Virus Based Nanostructured Materials in Three-Dimensional Microbattery Architectures."

Gerasopoulos, advised by Institute for Systems Research director and Herbert Rabin Distinguished Professor Reza Ghodssi (Electrical and Computer Engineering), works on a project that seeks to turn the normally-harmful tobacco mosaic virus (TMV) into a template used to build millimeter- or sub-millimeter-sized energy storage devices. The technology has applications in battery electrodes, sensors, and other micro- and nanoscale devices.

Over the past three years, Gerasopoulos' work, which is carried out in Ghoddsi's MEMS Sensors and Actuators Laboratory, has been widely recognized by both academia and the media. His previous honors include a paper being named a "Highlight of 2008" by the Journal of Micromechanics and Microengineering, an invitation to present in the Massachusetts Institute of Technology's 2010 Micro/Nano Seminar Series, coverage on Discovery News and Nanowerk, and a Best Poster Award at the 2010 Mid Atlantic Micro/Nano Alliance Symposium.

Gerasopoulos will go on to represent MSE in this year's forthcoming Dean's Doctoral Research Award Competition. 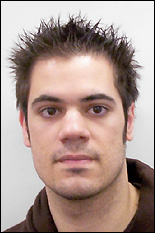