A group led by ISR-affiliated Professor S.K. Gupta (USC) is one of five finalists for the 2017 KUKA Innovation Award on the topic, “Advances Mechatronics.”

The “Advanced Robotic Finishing” team consists of graduate students and staff from USC’s Center for Advanced Manufacturing, which Gupta directs. They are working on the automation of finishing processes such as deburring, grinding or polishing. Using automatic algorithms for workpiece detection and path planning, the team aims to make the machining of small batch sizes more cost-efficient.

The finalist teams will be working from now until April to implement their concepts using KUKA hardware. They will demonstrate their results at the Hannover Messe 2017 international industrial technology trade show, April 24–28 in Hannover, Germany. The competition winner receives a 20,000 Euro prize.

KUKA launched the research competition in 2014 to promote innovation in the field of robot-based automation and to support technology transfer from science to industry. It is aimed at developers, graduates and research teams from companies or universities.

S.K. Gupta interviewed for robotics story in The Economist

Pioneering flight of ‘Robo Raven’ is major breakthrough for... 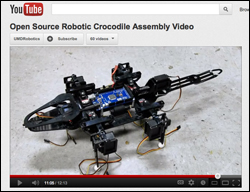