The temperature hovered in the teens. But to UMD UAS Test Site chief pilot Darren Robey and engineer Grant Williams, it felt even colder than that.

“Austere is an understatement,” Robey says of the conditions out on Lake Michigan in February, which challenged not only human endurance but that of the team’s rotorcraft.

He and Williams were there to test an idea, spearheaded by the company GeoThinkTank, that could ultimately help the National Oceanic and Atmospheric Administration (NOAA) refine its measurements of polar sea ice, as well as ice on the Great Lakes and other bodies of water.

NOAA uses satellite imagery in order to make such measurements. But in order to gauge the accuracy of that data, scientists must be able to validate it by comparing it to data obtained at surface level. Until now, that would have involved sending teams out onto the ice to collect information.

But that can be costly, time-consuming, and dangerous. The locations involved are often remote and difficult to access. Teams can find themselves stumbling over ice ridges or encountering areas that are simply impassable. In theory, drones could do the job more easily and quickly.

“Unmanned systems offer capabilities that just weren’t available before,” says NOAA principal investigator and scientist Sean Helfrich. “We’re hoping that by using such systems and equipping them with relatively low-priced cameras, we can get a valid estimation of what the satellite is seeing and how close that is to actual sea ice observations.” 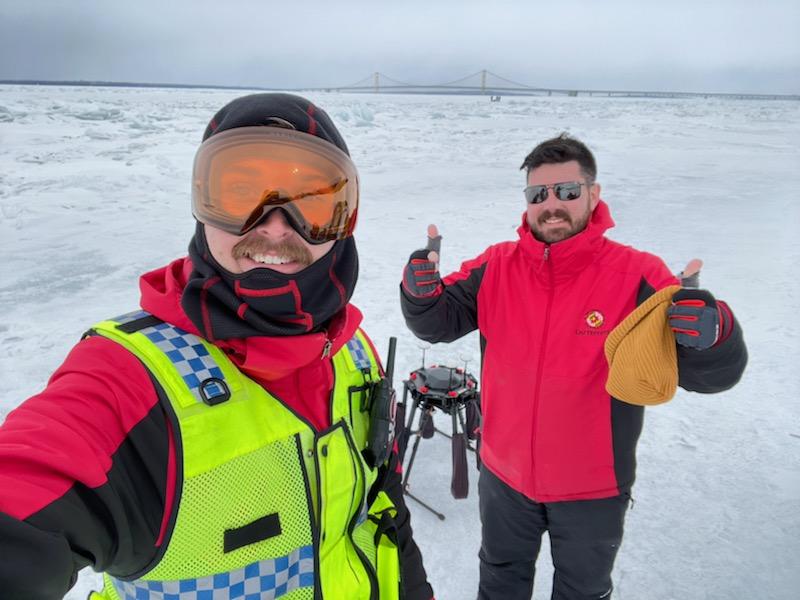 Not only that, but drones equipped with the right sensors can more readily capture information about ice properties such as reflectance, temperature, and how far the ice is protruding above the water line. Such information can be crucial to understanding ice thickness and how difficult it might be for vessels to navigate around ice in the area.

“The integration of advanced sensors on small unmanned systems will enable a new wave of scientific capabilities and innovation that is only just beginning,” said GeoThinkTank CEO Francis Padula.

The idea sounds attractive. But for it to become a reality, NOAA first needs to ensure that drones can perform under extreme conditions.

The tests in February—held in conditions that weren’t quite those of the Arctic, yet close enough—were designed to show just how well an unmanned aircraft can withstand sub-freezing temperatures.

One key concern: protecting the sensors. The NOAA team was using a system known as MCAW, consisting of a six-channel multispectral camera plus an infrared one, all pointing in the same direction. Such a setup is capable of imaging that captures the same kind of information as in a satellite image, though at a far closer distance.

“Unmanned systems offer capabilities that just weren’t available before. We’re hoping that by using such systems and equipping them with relatively low-priced cameras, we can get a valid estimation of what the satellite is seeing and how close that is to actual sea ice observations.”

But the MCAW system isn’t designed for temperatures below freezing, and exposure to the elements could easily damage the sensitive machinery. Moreover, the company that manufactured MCAW no longer exists, making it difficult to replace parts or conduct repairs.

To keep the cameras safe and warm, test engineer Josh Gaus had spent much of the previous weeks working to design and perfect a 3D printed insulation system. Gaus knew that it not only had to be robust enough to protect the equipment, but also easy to install and remove.

“Out in the cold, you don’t want to have to fiddle with fifteen tiny set screws so you can remove it in order to swap something out,” Gaus said. “We designed it so it can be removed easily by gloved hands. You just pull out a pin and the whole thing slides off the aircraft. It all stays insulated and protected.”

The insulation system engineered by Gaus, with technical support from GeoThinkTank, also helped keep the drone’s batteries from becoming too cold to perform adequately. This had been another major worry for the team going into the tests. As Robey explains, “they’re the crux of the operation. Without battery power, you’re stuck.”

Normally, the DJI M600 aircraft they were using could be expected to stay aloft for about 20 minutes while hauling a 15kg payload. But in sub-freezing temperatures, all bets were off. To ensure the drone could stay in the air, Robey and Williams in effect had to trick the batteries into believing the temperature was 45 degrees Fahrenheit, rather than 10 to 15.

The insulation system helped achieve this. In addition, the team kept the aircraft sheltered in a tent equipped with a propane heater until immediately before flight. Then, as they operated the aircraft, the internal components—as well as the batteries themselves—would warm themselves up. While these measures couldn’t prevent some degradation in battery performance, the team was able to keep the drone in the air long enough to collect the needed data.

“We wanted to be able to operate continually and not impede the data collection,” Robey said. “NOAA’s sensor and data analysts were out there on the ice with us; and their ability to do their work depended in turn on the reliability of our flight ops. The purpose of the mission was data collection; the aircraft was a means to accomplish that.”

If the use of drones in the data validation process proves feasible in the long run, it could bring many benefits. For one thing, NOAA uses satellite imagery of the polar icepacks to help gauge the effects of climate change. The more accurate the data, the more reliable the models.

“Satellites provide some of our best tools for understanding how sea ice has changed over time, and much of that is based on passive microwave-based measurements, where we take the emissions in the microwave portion of the spectrum of the earth and then determine how much of that signal is changed by trying to go through ice,” Helfrich said.

“These types of measurements do involve a level of uncertainty, however. By adding drones to the mix, we can quantify the errors. We can get a better sense of where the uncertainties lie in longer term records and make sure that current and future records are more precise.”

Meteorologists, meanwhile, rely on sea ice data in making their forecasts. That’s because conditions in the Arctic play a major role in determining weather conditions across the North American continent. With fine-tuned data available, weather forecasters may be able to better predict whether a coming weather system will yield the next Snowmageddon—or just a dusting.

Better measurements can also be a boon to native populations in the Arctic whose subsistence hunting depends on ice condition, and it can also aid commerce in the areas such as the Great Lakes regions in the United States, where critical supplies must be transported in and around the ice. As Helfrich notes, “the applications are many.”

And while this round of tests was only a first step, it yielded the kinds of findings that NOAA needs to move forward—in no small part, Helfrich said, because of the capabilities demonstrated by the UMD UAS Test Site team.

”Their ability to understand what we needed was a huge strength,” he said. “It’s why were able to accomplish so much in so little time.”