The segment gives a brief overview of their study, funded in part by NSF, which found that adults aged 61–73 with normal hearing scored significantly worse on speech understanding in noisy environments than adults aged 18–30 with normal hearing. It is the second story in Episode 47, and starts at about the 1:15 mark in the video.

“Evidence of degraded representation of speech in noise, in the aging midbrain and cortex” was published in the Journal of Neurophysiology, part of ongoing research into the so-called cocktail party problem, or the brain’s ability to focus on and process a particular stream of speech in the middle of a noisy environment. This research brings together the fields of hearing and speech science, neuroscience and cognitive science, electrical engineering, biology, and systems science.

You can read more about the research in our October 2016 story here.

The researchers are all associated with the UMD’s Brain and Behavior Initiative. 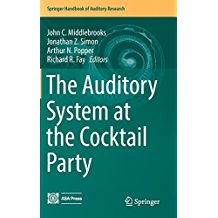