A long-term, interdisciplinary research collaboration at the University of Maryland’s A. James Clark School of Engineering has made significant progress in detecting and treating bacterial biofilms by developing new chemical compounds, materials, and microsystems that can fight these sources of post-operative infections.

Bacterial biofilms are almost always involved in device-associated and post-operative infections and account for approximately half of all the estimated 700,000 to 2 million hospital infections annually. They form when planktonic bacteria adhere to moist surfaces and encase themselves in an extracellular matrix. This matrix offers significant protection for the bacteria against antimicrobial medicines and makes it easy for them to spread through gene transfer.

Biofilms easily form on implanted medical devices such as catheters, prosthetic joints, and dental implants. Urinary catheters, some of the most commonly inserted medical devices, are susceptible to biofilm forming from bacteria in the urine at a rate of 5–7 percent per day. Because high doses of antibiotics are required for their removal, biofilms contribute to the increase in antibiotic-resistant strains of bacteria.

“There is a need for non-invasive, real-time selective and sensitive detection of biofilms that can aid infectious disease practitioners in the treatment of biofilms on indwelling medical devices,” says Dr. Rodney Donlan of the Biofilm Laboratory at the Centers for Disease Control and Prevention (CDC) in Atlanta.

In their 10-year collaboration, Professor Reza Ghodssi (Department of Electrical and Computer Engineering; Institute for Systems Research), Professor William Bentley (Fischell Department of Bioengineering), and their students and colleagues have advanced the state of the art in both biofilm detection and treatment. They have developed microsystems that can detect and measure (“characterize”) biofilm as well as microsystems for biofilm treatment. The most recent device, which can be placed in urinary catheters, can do all three.

“Our work not only uses microfluidic systems as a discovery platform to investigate biofilm behavior, but also develops future technologies such as flexible substrates and devices that we hope soon will be able to combat the formation or treatment of disease in patients,” Ghodssi says.

With Professors Greg Payne (Fischell Department of Bioengineering), Gary Rubloff (Department of Materials Science and Engineering), and Herman Sintim (Purdue University), the researchers developed treatments that can reduce or eliminate the need for antibiotics.

Chemical compounds called quorum sensing inhibitors can interrupt the pathways by which bacteria communicate, preventing biofilm formation. Bacteria are then maintained in their planktonic state, which keeps them more vulnerable to traditional treatment. “The idea is to shut off communicating cells and make them susceptible to various treatments,” says Bentley.

Electroceuticals use electric fields to generate toxic compounds that kill biofilms and can be used in specialized wound dressings. Surface coatings can include liquid-infused surfaces, micro/nano structured surfaces, or antimicrobial infused surfaces, such as surfaces loaded with silver particles. They are of particular interest in addressing biofilms adhering to devices such as catheters. The bioelectric effect is a small electric field that increases the efficacy of an antimicrobial, such as an antibiotic or quorum sensing inhibitor. Adding it to treatment lowers the amount of antimicrobial needed to be effective, helping slow the increase in antibiotic-resistant bacteria.

The researchers also developed a lab-on-a-chip hydrogel-controlled environment to monitor biofilm activities and test treatments. Hydrogel is a water-based polysaccharide that can help hold bacteria in place. When used within a microfluidic, micro-electro-mechanical (MEMS) platform, the hydrogel permits researchers to assemble bacteria in ways that mimic the formation of a biofilm, then apply stimuli and measure responses in three dimensions.

In 2015, the research team was awarded U.S. Patent 8,952,192 for “Phosphorylated and Branched Dihydroxy-Pentane-Dione Analogs as Quorum Sensing Inhibitors in Bacteria.” The patent includes both the compounds and the hydrogel environment.

Microsystem devices that can both characterize and treat biofilms

The researchers have developed a number of microsystem approaches to providing sensitive, real-time biofilm measurement. Optical sensing systems measure changes in opacity that accompany biofilm formation in a microfluidic channel. Surface acoustic wave sensors can precisely quantify the mass of a biofilm as it forms on the sensing surface and alters the measured resonant frequency. Microelectrodes quantify biofilm growth in real-time through electrochemical analysis techniques.

Early prototypes of these systems were rigid, planar structures that did not work well with the complex geometries of many types of medical implant devices—for example, the cylindrical shape of catheters—and required bulky components that were not biocompatible. Over the years the researchers have refined the devices to become smaller, biocompatible and flexible.

A biofilm sensing and treatment device for catheters

Most recently, the Flexible Impedance Sensor brings many of these advances together in one device. It is a biofilm sensing and treatment microsystem for urinary catheters that combines biofilm sensing and the bioelectric effect treatment in a flexible cylindrical tube. The device is rolled and inserted inside the catheter, where its microfabricated polymeric substrate and electrodes seamlessly conform to the catheter’s surface. The device also has the potential to work on many other kinds of biofilm-susceptible surfaces.

Catheters with this device will be able to simultaneously monitor film formation and implement bioelectric effect-based synergistic treatments to remove them. Its electrodes expose the biofilm to a small electric field which synergistically increases the effectiveness of antimicrobial treatment and significantly lowers the dosage of antibiotics needed for biofilm removal. A patent application has been submitted.

Roger Howe, the William E. Ayer Professor of Engineering in the Department of Electrical Engineering at Stanford University, writes, “In addition to detecting the formation of the biofilm by optical, acoustic, and impedance techniques, this research group has demonstrated that applying electric fields renders the biofilm much more susceptible to antibiotics. In their recent papers, biofilm detection and control have been integrated into the same microsystem platform, which makes the technology easier to use for biofilm control in implantable devices.”

The CDC’s Donlan says, “Drs. Ghodssi, Bentley, and colleagues at the University of Maryland have developed several model systems that can provide sensitive, real-time detection of microbial biofilms, suggesting the potential for new approaches for biofilm surveillance on indwelling medical devices.”

The work is progressing towards multidimensional, challenging environments like detecting and treating biofilm infections in patients or monitoring for biofilm growth in environments such as water pipes, according to Ghodssi, with a goal of smart, self-sustaining, flexible sensors.

“We are so excited that these efforts will be among the first devices developed by our new Robert E. Fischell Institute for Biomedical Devices,” says Bentley. “It will bring together these kinds of multidisciplinary approaches and talented individuals to build systems that make a difference.”

Howe concludes, “The impact of this research, as it transitions into biomedical devices, will be to reduce infections while simultaneously reducing the dosage of antibiotics—a major contribution to improving healthcare.”

| A more detailed version of this article is available here | 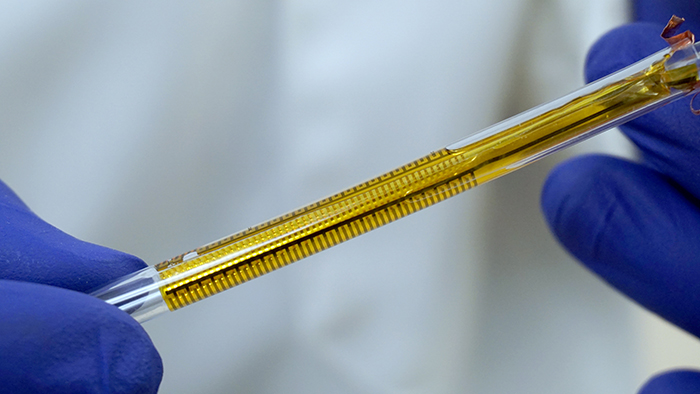