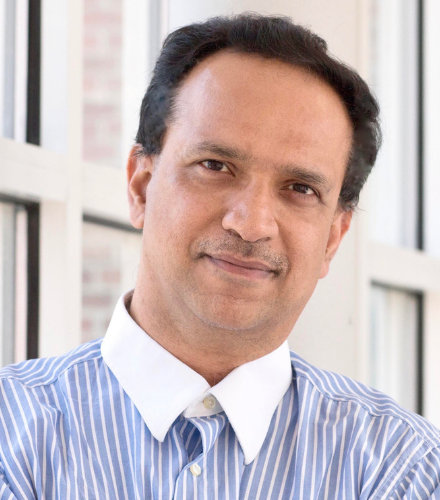 Dinesh Manocha is the Paul Chrisman Iribe Chair in Computer Science & Electrical and Computer Engineering and Distinguished University Professor at the University of Maryland College Park. He is also the Phi Delta Theta/Matthew Mason Distinguished Professor Emeritus of Computer Science at the University of North Carolina - Chapel Hill. He has won many awards, including Alfred P. Sloan Research Fellow, the NSF Career Award, the ONR Young Investigator Award, Google Faculty Awards,  Facebook Faculty Awards, Alibaba Innovation Awards, and the Hettleman Prize for scholarly achievement. His research interests include multi-agent simulation, virtual environments, artificial intelligence, and robotics. His group has developed a number of packages for multi-agent simulation, GPU computing, and physics-based simulation that have been used by hundreds of thousands of users and licensed to more than 60 commercial vendors. He has published more than 600 papers and supervised more than 40 PhD dissertations. He is an inventor of 10 patents, several of which have been licensed to industry. His work has been covered by the New York Times, NPR, Boston Globe, Washington Post, ZDNet, as well as DARPA Legacy Press Release. He is a Fellow of AAAI, AAAS, ACM, and IEEE, member of ACM SIGGRAPH Academy, and Bézier Award from Solid Modeling Association. He received the Distinguished Alumni Award from IIT Delhi and the Distinguished Career in Computer Science Award from Washington Academy of Sciences. He was a co-founder of Impulsonic, a developer of physics-based audio simulation technologies, which was acquired by Valve Inc in November 2016. See http://www.cs.umd.edu/~dm

His research group developed software packages for physically based modeling, computer-aided design and scientific computing, which have been downloaded by more than 200,000 users worldwide and licensed to more than 55 corporations, including Fortune 500 companies. He is also named as an inventor on nine patents, several of which have been licensed to industry.He also supervised more than 65 master’s and doctoral students. Many of Manocha’s 35 Ph.D. advisees are professors at top universities and group leaders in industry.

Along with two of his former Ph.D. students and Professor Ming Lin, who is now the Elizabeth Stevinson Iribe Chair of Computer Science at UMD, Manocha co-founded the 3D audio startup Impulsonic, which was acquired by Valve Software in 2016. Impulsonic’s product provided the realistic sounds required for a user to feel truly immersed in a virtual world and is available as part of Steam Audio SDK. The sound technologies developed by the researchers have also been used to evaluate the acoustic effects of architectural buildings and to model noise in indoor and outdoor environments.

For another research project, Manocha uses virtual reality and simulation technologies to predict the movement of pedestrians and crowds. These technologies can be used to improve crowd safety and prevent disasters like the 2015 Hajj crowd disaster in Mecca, Saudi Arabia, where more than 2,200 pilgrims died. The multi-agent navigation technologies developed by Manocha’s group have also been integrated into most computer gaming engines.

More recently, Manocha and his students began developing new technologies to simulate the movement and behavior of autonomous vehicles in challenging traffic conditions, such as Beijing or Washington, D.C. The major goal of this work is to predict the navigation and safety capabilities of autonomous cars in crowded scenarios that contain other vehicles, pedestrians and bicycles. Manocha’s group has been collaborating on this project with Intel Corp. and Baidu Inc.

Helping robots navigate to a target, around obstacles and without a map

AVs need to be able to identify aggressive drivers and adapt their own movements accordingly. A new "risk-aware" planner can help.

UMD Inventions of the Year nominee could help prevent spread of deepfake media and misinformation.

TerraPN is a new way for autonomous robots to improve their navigating abilities by learning the surface characteristics of complex outdoor terrains.

Algorithms for connected autonomous vehicles will help traffic safety in many ways.

The funding will support her work to improve deep learning algorithms that can interpret human emotions.

Funding will support the use of synthetic datasets to improve the accuracy machine learning methods.

The autonomous mobile robot can detect and warn people who are standing too close to each other.

This project will plan a more ideal research infrastructure for roboticists and experts in modeling, simulation, testing, evaluation and software engineering.

GAMEPLAN is developed by Dinesh Manocha and Rohan Chandra.

An alignment-based redirection controller directs users to the best route for avoiding obstacles.

The awarded work focuses on improving the efficiency of virtual agents used in areas like virtual and augmented reality (VR/AR), online learning, and virtual social interactions.

The student of Dinesh Manocha is developing systems and devices that can recognize, interpret, process and simulate human actions and emotions.

Beneficiaries include two Ph.D. fellowships in robotics, the Center for Minorities in Science and Engineering, a robotics capstone course, the Black Engineers Society and the Society of Professional Hispanic Engineers.

Project by three MRC faculty members was one of six that received BBI seed funding this year.

The NSF EAGER project intends to monitor pedestrian movements, using cameras and other sensors, that will automatically check for vital signs to gather reliable data, and investigate techniques to influence the behaviors of pedestrians to change their social behavior using robots.

Fagan is the sixth ISR faculty member to receive the honor.

Manocha has received the highest honor bestowed on tenured faculty members at the University of Maryland.

Manocha receives the 2020 Pierre Bézier Award in recognition of his technically significant and lasting contributions in Solid, Geometric and Physical Modeling and their Applications.

Dinesh Manocha and Aniket Bera’s latest development on a socially-intelligent robot known as ProxEmo, has been featured in Forbes.

The framework could be used in navigation algorithms for robots ranging from aerial vehicles to autonomous cars.

The algorithm uses tracking-by-detection approach to detect vehicles and pedestrians, then predict where they are going.

Participants addressed infrastructure requirements of algorithm development and testing for these networks.

American Association for the Advancement of Science (AAAS)