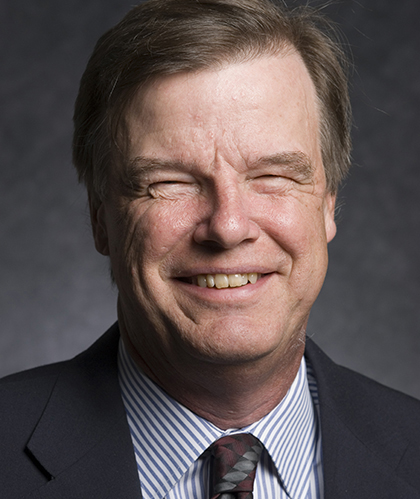 Michael Ball is the Senior Associate Dean and Dean's Chair in Management Science and the Orkand Corporation Professor of Management Science in the Robert H. Smith School of Business. He also holds a joint appointment with ISR in the Clark School of Engineering. Dr. Ball received a BES in Engineering Science in 1972 and an MSE in Operations Research in 1972 from Johns Hopkins University and a PhD in Operations Research in 1977 from Cornell University. He worked for two years at Bell Laboratories and has had sabbatical appointments at the University of Waterloo and the University of North Carolina. He is former chair of the Decision and Information Technologies Department within the Robert H. Smith School of Business and former chair of ISR's Executive Committee. He is currently Acting Dean for the Smith School.

Dr. Ball currently directs the NSF-funded project, "Supply Chain Infrastructures: Models and Analysis" and is Co-Director of NEXTOR, the National Center of Excellence for Aviation Operations Research. Within NEXTOR, which is funded by the FAA, NASA and members of the airline industry, he directs the Collaborative Decision Making research project. The interdisciplinary nature of his work led to Dr. Ball receiving the Outstanding Systems Engineering Faculty Award from the ISR in 1997. He has over 90 publications in the aforementioned areas and has made over 100 presentations on these topics. He also has extensive consulting experience, which, in certain cases, has led to the development and successful implementation of major software systems.

He is a member of the "Independent Experts Operational Goals Group (IEOGG)" of the Committee on Aviation Environmental Protection, part of the ICAO, the International Civil Aviation Organization. ICAO sets the standards and policies for world-wide civil aviation.

Worsening thunderstorm activity was the main cause of increased flight delays in the 2010s.

The operations research expert argues more lives would be saved with a less-rigid strategy.

In its 23 years, NEXTOR has developed decision support tools, operational and system concepts, and policymaking tools that benefit the FAA, the airline industry and the flying public.

The symposium will be held at FAA headquarters in Washington, D.C.

Delegates meet with President Loh, Provost Wylie and other officials.

The two Ph.D. students are associated with the NEXTOR aviation operations research center.

The Dallas Morning News quotes the ISR professor about the possibility of an American Airlines merger.

Ball to speak at airport systems planning and design course

He talks with us about applying systems concepts in the business world.

Ball, named a Fellow of INFORMS

INFORMS is a principal professional society

Mizusawa is a research scientist at Toshiba Corporation.

CDM is one of the research areas of NEXTOR

$2 million NSF award will analyze a variety of e-markets.

Institute for Operations Research and the Management Sciences (INFORMS)