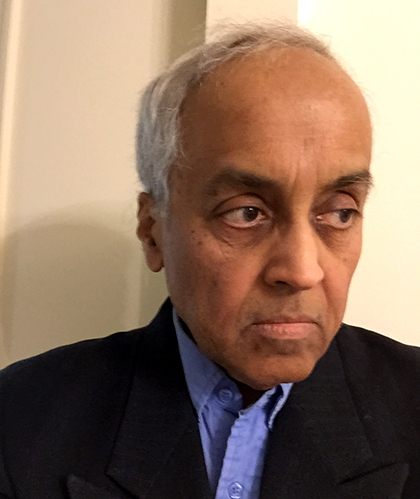 P. S. Krishnaprasad received his Ph.D. degree from Harvard University in 1977. He was on the faculty of the Systems Engineering Department at Case Western Reserve University from 1977 to 1980. He has been with the University of Maryland since August 1980, where he has held the position of Professor of Electrical Engineering since 1987, and a joint appointment with the Institute for Systems Research since 1988. He is also a faculty member of the Program in Applied Mathematics and Statistics, and Scientific Computation, and the Program in Neuroscience and Cognitive Science. Since 1987 he has led the Intelligent Servosystems Laboratory.

Krishnaprasad has held short and long term visiting positions with Erasmus University (Rotterdam); the Department of Mathematics, University of California, Berkeley; the University of Groningen (the Netherlands); the California Institute of Technology; the Mathematical Sciences Institute at Cornell University; and the Mechanical and Aerospace Engineering Department at Princeton University.

Krishnaprasad's research interests lie in the broad area of geometric control theory and its applications. His past contributions include geometry of parametrization problems in linear systems, the Lie algebraic foundations of certain nonlinear filtering problems pertaining to system identification, the Lie theory and stability of interconnected mechanical systems (e.g., spacecraft with elastic attachments, spinning rotors, and fluid-filled cavities), and symmetry principles in nonlinear control theory. He has also investigated mathematical problems in the kinematics and control of robot manipulators, the real-time control of flexible robot arms with end-point sensing, tactile perception, and the development of symbolic algebraic tools for design and control. In the last several years, his interests have drawn him to: problems of modeling, design, motion planning and control, arising in mobile robotics (legged and wheeled vehicles, autonomous underwater vehicles and autonomous aircraft); geometric methods in nonlinear dynamics; wavelet analysis for signals and systems; intelligent control architectures, in part inspired by biological paradigms such as central patterns generators and neural networks; the technology and theory of smart materials such as piezo-electric and magnetostrictive materials for use in actuation and sensing; problems of integration of actuators and sensors in control networks; and modeling, simulation, monitoring and control in semiconductor manufacturing processes, such as rapid thermal chemical vapor deposition.

A central interest in geometric control theory, geometric mechanics, Lie groups, and distributed parameter systems, guides the technical approaches taken to attack problems in the above areas. Additionally, some of this work is also linked to the experimental efforts in the Intelligent Servosystems Laboratory.

P. S. Krishnaprasad was elected a Fellow of the IEEE in 1990 for his contributions to geometric and nonlinear control and engineering education. He was appointed a 1998-2000 Distinguished Faculty Research Fellow of the University of Maryland. He was a member of a team recognized by American Helicopter Society's Grover E. Bell Award (2002) (for work on smart structures during 1991-96) bestowed on the Alfred Gessow Rotorcraft Research Center. He was the Munich Mathematical Colloquium Lecturer (October 24, 2006). He is the recipient of the 2007 Hendrik W. Bode Lecture Prize of the IEEE Control Systems Society, for fundamental contributions to the theory of control of natural and synthetic physical systems.

Technology of smart materials such as piezo-electric and magnetostrictive materials for use in actuation and sensing; nonlinear problems in such materials; hysteresis modeling and compensation; integration of such materials in structures (e.g. networking); computational methods in ferromagnetism with applications to the design of Terfenol-D actuators

Subriemannian geometry and optimal control in the study of collectives, and for the design of efficient, nanoscale heat engines; critical dynamics in field theory and related optimal control problems

The research interests described above are supported by a program of experimental investigations in the Intelligent Servosystems Lab (ISL) where, in the period 1986 – 2019, the projects included; experiments in positioning, vibration suppression and impact control of a flexible arm with embedded actuators; mechanical manipulation with a modular hand invented in ISL; a hybrid (piezoelectric-magnetostrictive) motor invented in ISL; nonholonomic robot design; a parallel linkage manipulator invented in ISL; 3-D solid modeling and graphical animation; and motor networks. The primary current emphasis in ISL is on mobile robotics and software for control of collectives of robots. A Vicon motion capture system was installed in 2013 to study collective behavior of robots, and is used to validate principles and algorithms applicable to biological and robotic collectives

The Princeton professor is being recognized "for contributions to applications and theory for control of nonlinear and multiagent systems."

Varaiya was a friend and supporter to ECE and ISR faculty and students for many years.

Manikonda is the former president and CEO of IAI, acquired by BlueHalo in 2021.

The findings recently were published in PNAS, in a special feature on political polarization.

Kantor is leading Carnegie Mellon University’s work in a new AI Institute for Resilient Agriculture, a joint initiative of the USDA and NSF.

Alum Xiaobo Tan and his MSU colleagues have developed sensing panels that can record the mechanics of the attachment.

Tsakiris provides context for the breakthrough work of a research team in the Mariana Trench.

This issue explores unifiability, the leveraging of approaches and capabilities from different practices and paths of inquiry to foster functional systems engineering for complex problems.

Pohland will attend the University of California, Berkeley, pursuing research in robotics.

Kevin Galloway and Biswadip Dey were advised by Professor P. S. Krishnaprasad and worked in the Intelligent Servosystems Laboratory.

Tan was recognized for his work in robotics.

The researchers will equip autonomous systems with an additional layer of intelligence to improve safety and resilience.

The workshop was sponsored by the Army Research Office, the Clark School, ECE and ISR.

Twu has worked on both the Parker Solar Probe and the 2020 Mars Rover.

The award recognizes the scholarship of senior faculty members in the MSU College of Engineering.

The lecture was part of the Halcyon Dialogues on Robotics held at AAAS headquarters in Washington, D.C.

His research interests are in the design and control of marine robots and mobile sensor networks, as well as cyber-physical systems theory.

Iyer has research interests in systems and control theory and their applications in optics, bio-engineering, and cybersecurity of critical infrastructure systems.

His citation reads, “for contributions to modeling and control of smart materials and underwater robots.”

New paper by Krishnaprasad, Galloway, Justh published in Proceedings of the Royal Society A.

Naomi Leonard to be inducted into Innovation Hall of Fame

Tan earned a 2002 Ph.D. in electrical engineering from the University of Maryland.

The workshop was part of the 53rd IEEE Conference on Decision and Control.

The MSU professor's fish will track the movements of lake trout, walleye and lake sturgeon.

Galloway, Justh, Krishnaprasad publish chasing and flocking research in Proceedings of the Royal Society A

New models and equations aid in understanding of natural phenomena, has implications for engineered networks of robots.

Visitors were in town for the annual AUVSI conference.

Biswadep Dey and Ravi Garg receive assistance from the Kulkarni Foundation in the final stages of their Ph.D. research.

System will include mobile robots, cameras and enhanced computational resources.

Was named to the 2012 Baetjer Colloquium Lectureship for contributions to geometric control, filtering theory, robotics and bio-inspired design.

The $1.8M grant is a collaboration with National Geographic to monitor and protect endangered species.

Flocks and swarms of birds and insects will be studied to discern underlying principles, build models and algorithms.

Tan, a 2002 ECE alumnus, has been promoted to Associate Professor of ECE at Michigan State University.

Former student of P.S. Krishnaprasad is one of only 17 recipients nationwide.

Assistant professor one of six to win the early career award.

Pati will be honored for developing phase-shift lithography.

"Research Experiences for Teachers" will focus on biology-inspired technology and systems.

Research will focus on nonlinear control for single molecule tracking.

The Math/ISR professor gave a special lecture on May 21.

Paper by Krishnaprasad, Justh, Wei published in Proceedings of the Royal Society A

The Qualcomm engineer talks about his career in the wireless communication industry.

Xiaobo Tan, assistant professor at Michigan State, showcased his research at a June event in DC.

Kensuke Iwanaga and Tetsuaki Nakano are here for 14 months.

The 12 undergraduate students are participating in NSF's Research Experiences for Undergraduates program.

Quartet honored for outstanding contributions in 2007–2008.

He tells us about the DEPTHX underwater robot project.

Robots are based on biological principles and incorporate biomimetic electroactive polymers.

Matteo Mischiati and Philip Twu are the first IAI interns in a new collaborative program.

The 2004 ECE Ph.D. is currently a postdoc at Princeton working with Naomi Leonard.

Former student of P.S. Krishnaprasad has been with APL since 2003.

Research has uncovered computational principles underlying the processing and recognition of complex sounds in the auditory system.

Former student of P.S. Krishnaprasad specializes in systems and control theory in the context of aerospace and smart structures.

A new study from four ISR researchers shows bats use a guided missile strategy to catch their prey.

ISR grad student Luke Winternitz has co-written an article on his NASA work for GPSWorld magazine, explaining the development of a GPS receiver for high-altitude (above the GPS constellation) satellite navigation.

Work is based on 2004 symposium honoring Berenstein

Will be assistant professor in aerospace and mechanical engineering

Moss is PI for "Innovative Technologies Inspired by Biosonar"

Research will study transformation of sensory information to motor commands for adaptive behaviors.

Carlos Berenstein honored with celebration of his career

June 2004—ISR professors among speakers at the event, hosted by George Mason University.

ISR alum heads investigation for the Department of Defense

Team launched fleets of underwater vehicles into the Pacific Ocean